Mes aims to create an entirely source-based bootstrapping path. The target is to have GNU Guix bootstrap from a minimal, easily inspectable binary—that should be readable as source—into something close to R6RS Scheme.

As bootstrapping is presumably easiest and probably most fun with Scheme, Mes comes with mescc: a C compiler/linker to bootstrap into GNU GCC and GNU Guile, via TinyCC. Mes currently has an interpreter written in C with garbage collector, a library of loadable Scheme modules and test suite just barely enough to support a simple REPL and a C compiler that can build TinyCC. One of the next steps of this project includes replacing the mes and mescc-tools binaries with M1 sources based on stage0.

The following the graph shows how in Guix GCC is removed from the bootstrap binary seed. This is the dependency graph of the bootstrap as implemented in GNU Guix: 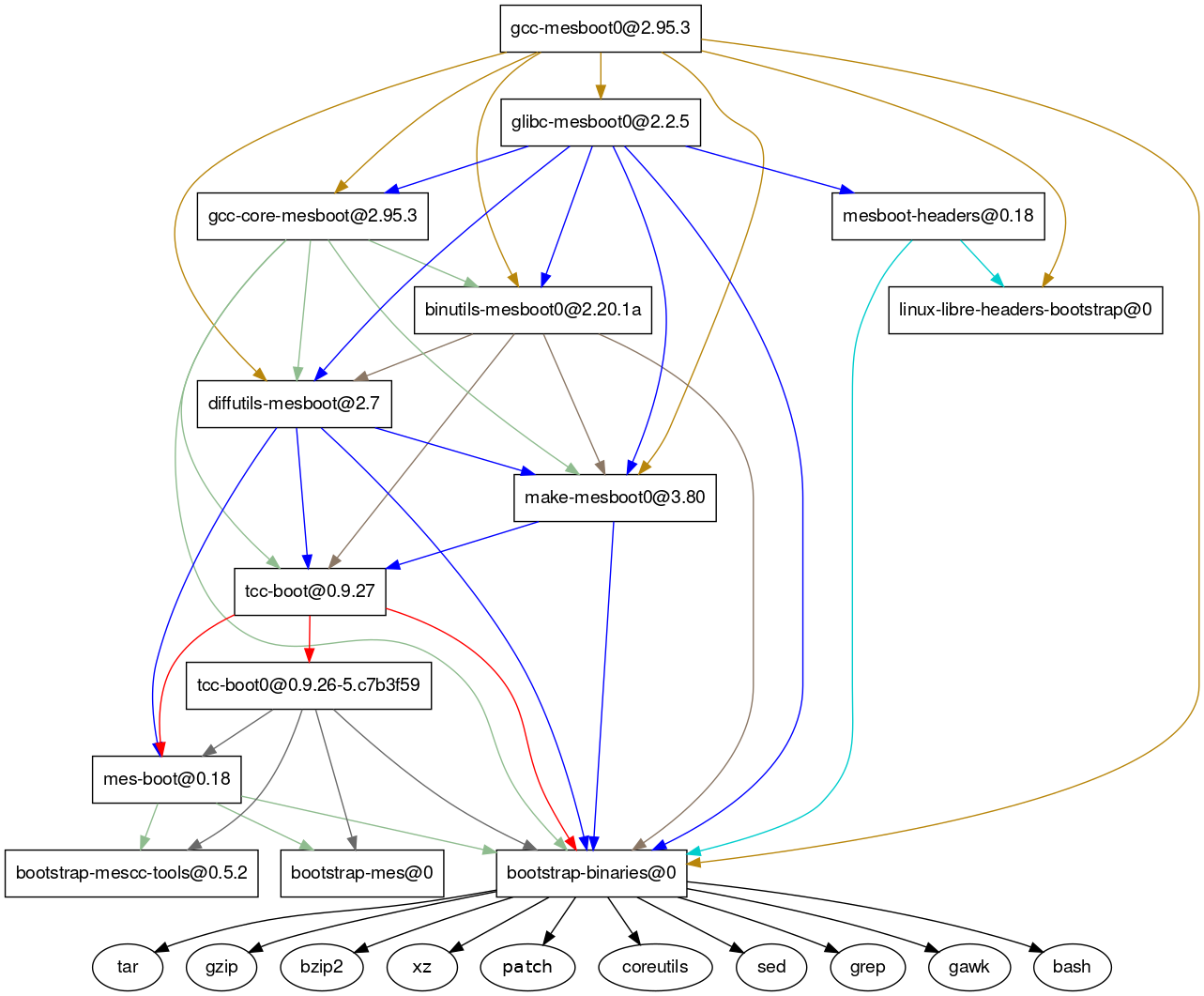 It is also possible to create a similar bootstrap path for other distributions, as showcased by Nix at the Reproducible Build Summit.

Build GCC 4.7 with a smaller compiler

GCC is a complex beast and a binary of it is often used to bootstrap the whole system. Version 4.7 is the last version of GCC to not require a C++ compiler. This project aims to build GCC version 4.7 with a simple C compiler such as TinyCC.

Since October 2019, Guix bootstraps by using MesCC—the small C compiler that comes with Mes—to build TinyCC, which is used to build GCC 2.95.0, which then builds GCC 4.7.4.

Reducing the seed even further: stage0

Stage0 starts with just a 280 byte Hex monitor and builds up the infrastructure required to start some serious software development.

With zero external dependencies, with the most painful work already done and real languages such as assembly, Forth and garbage collected Lisp already implemented.

Demonstrate some old school skill, by writing a new compiler or interpreter or help with various support tasks required to keep this project on track. Or if low level programming isn't for you, help bridge the gap between our goal and where we are by writing low dependency software in the high level language of your choice that might be easier for us to bootstrap.

Even if contributing to it isn't for you, if you could take 7 minutes to verify what already exists on whatever weird operating system or hardware you have; we would love to hear about your results.